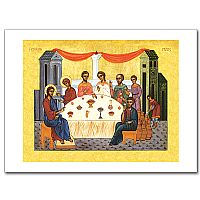 Jesus did this, the first of his signs, in Cana of Galilee, and revealed his glory; and his disciples believed in him.

What a beautiful and thoughtful gift for a wedding or anniversary! This wonderful icon depicts Christ’s first public miracle, the changing of water into wine at the request of His mother, as described in the Gospel of John (2:1-11). Card size 4 3/8" x 6".

In icons that illustrate a scripture story such as this one, the background is represented in a schematic, simplified fashion. This is done to avoid drawing the viewer’s attention away from the important aspects of the event--the people, their actions, and their relationships. The table is crudely drawn, with the top apparently tilted toward us. The chair Jesus sits upon appears to have the rear legs longer than the front ones. Both are examples of "inverse perspective," a visual device used in iconography to draw you, the viewer into the scene. The towers in the background tell us that the scene took place in a city. The red cloth drape across the top is a symbol that the events took place indoors. No highlights or shadows are ever represented in icons to indicate that God’s light surrounds all. The gold leaf background is another symbol of Divine light, gold being used because it reflects and enriches light in a manner so different from paint. All the persons mentioned in the Gospel story are included or symbolically represented in the image. Seated around the table from our left to right are Jesus, Mary, the groom, the bride, a representative disciple of Jesus, and the chief steward. One servant pours water into the jars while another serves the wine. Jesus and Mary have their heads surrounded by halos indicating their sanctity. Christ’s halo is always marked with a cross and the Greek letters omega, omicron, and nu spelling "HO ON." In English, this becomes "Who Am," the name used for God in Exodus 3:14. He wears a tunic of red, symbolic of His blood shed for us, and a cloak of dark blue, symbolic of the mystery of His divine life. Mary’s hands are raised toward Jesus in supplication as she intercedes with Him on behalf of the married couple. Church tradition has used this Gospel account to reinforce Mary’s power as an intercessor, since she overcame her Son’s reluctance to perform this miracle. The bride and groom are in the center focus of the scene, heads inclined toward each other indicating their love. The disciple is represented with a very large and high forehead, symbolic of spiritual enlightenment. His hand is raised in a gesture of blessing, acknowledging the manifestation of the Messiah’s power. The steward, obviously a connoisseur of fine wine, sits in rapt appreciation of his glass. The servants are drawn smaller than the guests, indicating their relative status. The Wedding Feast at Cana is the first of seven miracles described in the portion of John’s Gospel known to modern scripture scholars as "the Book of Signs." John’s sequence of events, the revelation of Christ’s glory taking place "on the third day" after the call to Philip and Nathanael, seems deliberately to recall the connection to Christ’s Resurrection on the third day following His death. By changing the water set aside for Jewish rites of purification into the new wine of the Messianic age, Jesus here begins a pattern of transforming the institutions of Judaism into those of Christianity. 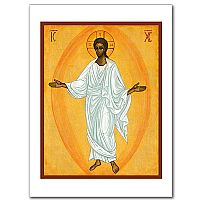