Besides Christ, no other subject has been more depicted in iconography than Mary, the Theotokos, Greek for “Mother of God,” literally “God-Bearer.”  Priests look to Mary as the perfect model for their existence, invoking her as Mother of the Eternal Priest, and as Protectress of their ministry,“Mary, Mother of Priests.”In this icon, Mary is shown wearing a veil typical of Jewish women of the period, but it also reveals her humility and piety. The color of the veil is red, the color of divinity in Byzantine art, as well as symbolic of nobility and saints. The garments under the veil and robe are green, the color of life and symbolizing earth, hope and Mary’s humanity.The letters in the upper left and right corners, “MP OY,” are an abbreviation of the Greek: Mater Theos – the Mother of God. Near Mary’s head on the left and right are the words “Marie” and “Mere Des Pretres,” translated as  “Mary” and “Mother of Priests” in French. Mary is holding a priest’s white stole, a liturgical vestment and symbol of the yoke of service, here adorned with three crosses for the Trinity. Mary, Mother of Priests aids him in living chastely and growing in charity, wisdom, and fortitude. 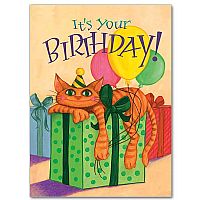 It's Your Birthday!
Child Birthday Card 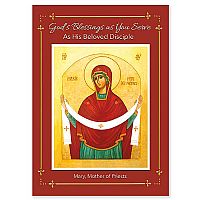