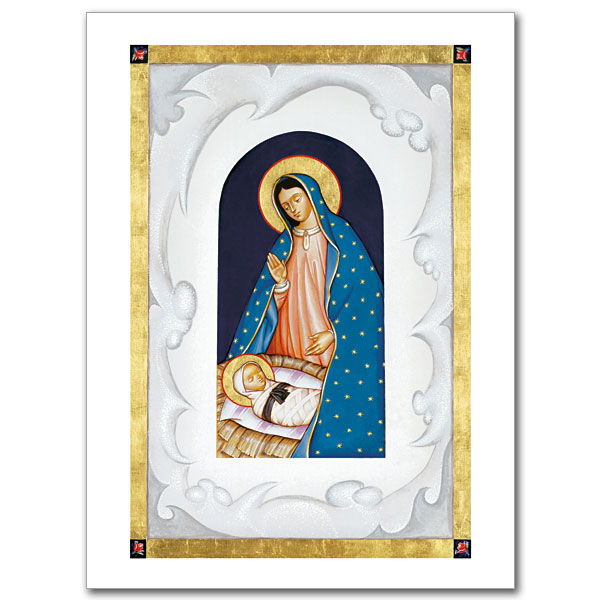 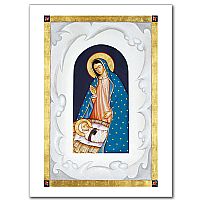 And the Word became flesh and lived among us, and we have seen his glory...

Two apparitions of Mary are the inspiration for this original icon. Our Lady of the Snows and Our Lady of Guadalupe both involved natural events at miraculously unnatural times: Snow in August showed Roman Christians where to build St. Mary Major. Roses in December helped Juan Diego convince a skeptical Bishop. Card size 4 3/8" x 6".

Mary has the features and dress of Our Lady of Guadalupe in this icon. She stands over the Creator of the Universe, manifested as a tiny, helpless infant. She is the agent of His Incarnation into the midst of His Creation, symbolized by her cloak covered with stars enveloping her and the manger of straw. The background of the center scene is a deep, featureless blue, symbolic of the pre-creation void. The black girdle which Mary had about her waist in the Guadalupe image has been transferred to the Babe as part of His swaddling clothes. It is a symbol of her pregnancy, and now she has given birth to Christ and He will give birth to His Church. Mary’s right hand is in the same position of prayer as the Guadalupe image, but her left has dropped toward Jesus, directing her (and our) prayer to Him. The frame of snow and storm forms a sharp visual contrast with the peaceful Nativity scene. It recalls the cold of December, 1531 and the miraculous snowfall in the heat of a 3rd century Roman August. It also recalls the world of sin and struggle into which this helpless Child was born and which He came to save. The frame of snow is framed again by the gold of Divine Light and the miraculous roses of December.