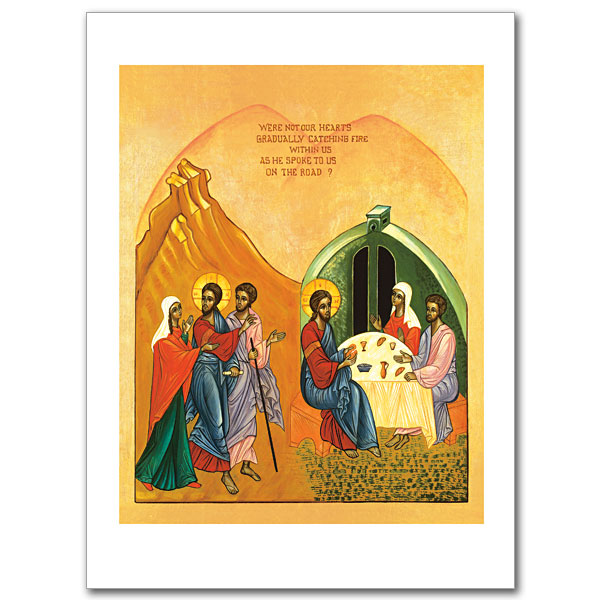 When he was at the table with them, he took bread, blessed and broke it, and gave it to them. Then their eyes were opened, and they recognized him...

Chapter 24 of Luke’s Gospel tells the familiar story about two of Christ’s disciples, one named Cleopas, who encounter a mysterious stranger on the road to the town of Emmaus. They only recognize Him as Jesus when they break bread together at the evening meal. This original icon by Sister Marie-Paul intriguingly portrays the unnamed disciple as a woman. Card size 4 3/8" x 6".

When a story is told in iconography, it is quite common to have multiple scenes exist in juxtaposition within the same image. Here, we see Jesus and the two disciples walking along amid mountainous terrain on the left, and the same individuals seated around the evening table at Emmaus on the right. The overall background and border of the icon is covered (in the original) with gold leaf. Gold is used in icons to represent the divine light of God’s revelation, chosen because of its value, freedom from tarnish, and its metallic ability to enrich and transform light in a manner so different from pigment. The words written at the top of the icon are an unusual translation of Luke 24:32. Jesus is dressed in classic ancient Greek robes, a tunic of red, symbolic of His humanity and His blood sacrificed for us, covered by a robe of dark blue, symbolic of the heavenly mystery of His divinity. On his right sleeve is a band of mixed red and gold threads, an ancient Byzantine symbol of royalty and signifying Christ’s role as King of the Universe. Jesus’ head is surrounded by a gold halo inscribed with a cross and the Greek letters omega, omicron, and nu. They spell "ho on," Greek for "Who Am," the name of God used in Exodus 3:14. The halo is used in iconography to indicate sanctity, and only Christ’s is inscribed with a cross. On the left, Jesus holds a scroll, symbolizing the Word of God which He is communicating to the disciples. On the right, He breaks the bread as He prepares to share it with them. The background scenery is rather crudely drawn and lacking in detail. This is deliberately done in icons to focus the viewer’s attention on the important aspects of the story. The furniture in the scene on the right is also represented in rather schematic form. In fact, the stool Jesus is seated upon appears to have shorter legs in front than in back. Rather than employing the more realistic technique of perspective drawing, iconographers frequently use "inverse perspective" to draw the viewer into the scene. By the time that Luke wrote his Gospel sometime between 63 and 80 AD, the liturgy of the Eucharist was well developed and this story has an obvious parallel with it--an explanation of scripture followed by the Eucharistic meal. The disciple’s eyes were opened to the reality of the Risen Christ with the breaking of the bread (Luke 24:35).