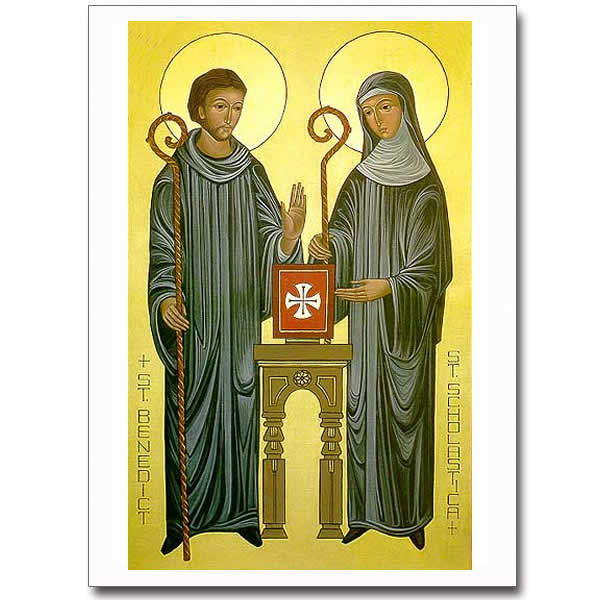 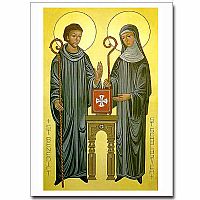 This composition by Sister Mary Charles shows the young St. Benedict and his twin sister, St. Scholastica, founders of the male and female Benedictine monastic orders. The original hangs in the chapel of St. Scholastica’s Monastery in Duluth, Minnesota. Card size 4 3/8" x 6".

Our reproduction is of a beautiful contemporary icon created by a Benedictine iconographer, Sister Mary Charles McGough. Scholastica and Benedict stand before us dressed in black Benedictine habits, holding crosiers or shepherd’s staves, symbolic of their spiritual leadership as abbess and abbot. Between them on a table is Benedict’s famous Rule for Monks. They are portrayed as young people, straight and tall, but with great serenity and evident wisdom. Their faces are drawn in traditional iconographic style, intended to convey their spirituality rather than serve as realistic portraiture. Their mouths are small and closed in the silence of contemplation. Their noses are drawn long and thin, the Byzantine ideal of nobility. The eyes are large and soulful, inviting the viewer to meditative communion with these great saints. Their heads are surrounded by halos covered in gold leaf. The halo in iconography is the symbol of sanctity and the metallic glow signifies the divine light of grace. In The Second Book of Dialogues, Pope Gregory the Great tells us of an encounter shortly before Scholastica’s death in which God allows her will to prevail over her brother’s wishes because of the strength of her love. Brother and sister were accustomed to meet once a year at the foot of the hill of Monte Cassino. On this last occasion, Scholastica desired for Benedict to remain after dinner and "talk on till morning about the joys of the heavenly life." Benedict refused, declaring the impossibility of spending the night away from his monastic cell (without violating the Rule). She lowered her head and prayed, whereupon such a downpour of rain broke out that Benedict and his brother monks could not put a foot outside the door of the little house where they had been meeting. Throughout Gregory’s Dialogues, Benedict had been shown to be a powerful worker of miracles through his prayers. In this situation, Benedict’s insistence on law is overcome by Scholastica’s love, showing us that nothing can be accomplished without the grace of God. And as the Gospel reminds us, "God is love." (John 4:16) 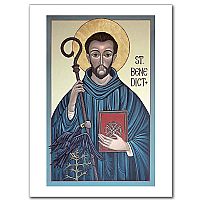 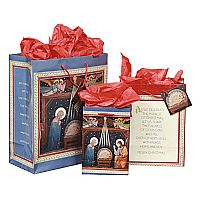