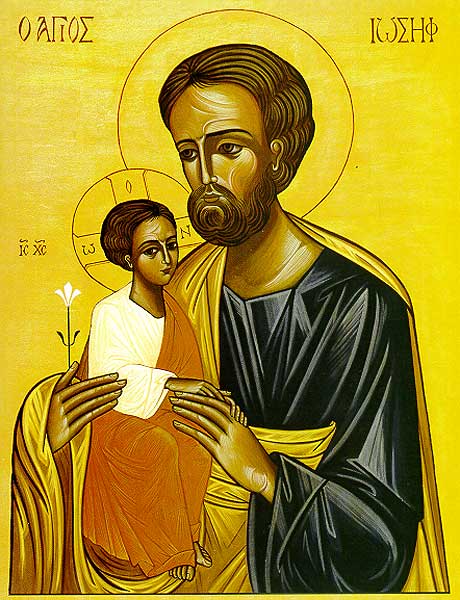 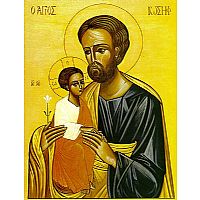 Joseph cradles the young Jesus in his arms, enfolding and protecting the Child, but not embracing Him. Joseph’s hands seem afraid to touch his foster Son, while the Son’s hands reach out to provide reassurance. Jesus sits on Joseph’s arm as though on a throne. For after all, He is the King of the Universe made manifest. He appears to weigh no more than a feather.

Both Jesus and Saint Joseph are garbed in the tunic and robe of the ancient Greek and Roman eras. Jesus’ tunic is white, symbolic of purity and membership in the Christian church. His robe is crimson and gold, traditional colors used to symbolize royalty in Byzantine icons. Each head is surrounded by a halo indicating sanctity. The Christ Child’s halo includes a cross and the Greek letters omega, omicron, and nu spelling "HO ON." In English, this becomes "Who Am," the name used for God in Exodus 3:14. Each halo is outlined in blood red, and the Greek letters on the background are the same color. Red is a sign of the blood of life shared between God and humankind.

The background of the icon is gold leaf. Gold has traditionally been used to symbolize Divine light because the metallic surface reflects and enriches light that strikes it in a manner so different from paint. The letters "IC XC" on the background are the Greek monogram for Christ, Iesous Khristos. The Greek letters near the top spell out "Saint Joseph."

One of the traditional symbols always associated with Saint Joseph is a staff topped with a lily. Church tradition tells us that Joseph was miraculously singled out in a group of potential suitors for Mary when his staff flowered into a lily. The miracle recalls the words of Isaiah: "A shoot shall come out from the stump of Jesse, and a branch shall grow out of his roots," alluding to the linkage between the coming Messiah and the line of King David. [Isaiah 11:1]