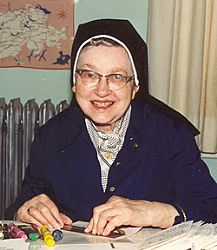 Sr. Leonarda Longen, OSB (1909-2004) Sr. Leonarda was born June 20, 1909 to John and Justina Fuchs Longen on the family farm between Roslyn and Eden, S.D. She was born Agnes Susan. For two years she attended a country school and then the family moved to Webster due to the ill health of her father. It was at the local parochial school that Agnes became acquainted with the Yankton Benedictine Sisters. Following graduation in 1927 from Webster Public High School Agnes went to Minneapolis to live with her recently widowed sister, Rose. Using the money she earned while in Minneapolis, Agnes enrolled at Northern State Teacher's College in Aberdeen, SD to pursue her dream of a degree in art. On August 9, 1929, she and her older sister, Marie, entered Sacred Heart Monastery and were invested as novices on August 7, 1930, with Agnes receiving the name Leonarda. She made her first profession of religious vows on august 12, 1931. Sr. Leonarda earned a BA degree in 1934 from the College of St. Mary of the Woods located in Indiana. Later she earned a master's degree in art from Notre Dame University, South Bend, Indiana. She taught art at Mount Marty Academy and College at Yankton, SD from 1934 to 1982. Sr. Leonarda was an excellent calligrapher and studied with several renowned calligraphers, including the Rev. Edward Catich of St. Ambrose College, Davenport, IA. She published a modest calligrapher's manual for beginners as well as several inspirational booklets. She undertook various commissioned works including symbolic murals of the Liturgy of the Hours for an oratory at Conception Seminary, Conception, MO. Her artistic talent was put to good use in creating numerous designs for liturgical vestments made by Sisters in the Vestment department of Sacred Heart Monastery, Yankton, SD. Sr. Leonarda was also an accomplished photographer. Sr. Leonarda was a pioneer in designing Christian greeting cards for Conception Abbey Press, later to become Printery House. She was one of several artists who designed the first 20 Christmas cards in 1953. She continued designing greeting cards for Conception Abbey Press for a number of years. She also did the calligraphy for the first edition of Our Family Book of Life published in 1949. Sister Leonarda was also instrumental in encouraging several monks of Conception Abbey to become calligraphers. Sister had taken a summer course in calligraphy from Father Edward Catich of St. Ambrose College and had kept detailed notes of the course. She provided a copy of her notes for the monks. Sr. Leonarda was one of the early Catholic calligraphers in the United States. She generously shared her calligraphic knowledge and skill with many, in and out of the classroom. Sister died February 7, 2004 at the age of 94 in the Care Center of her monastery in Yankton, SD. 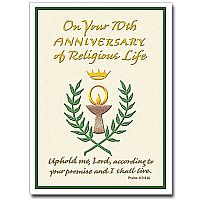