Our Mother of Consolation 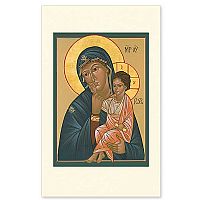 This very warm and appealing madonna and child was painted by Sr. Mary Charles in the style of the original from the Vatopedi Monastery on Mount Athos in Greece.

Icons of Mary and the Christ Child have a long and rich tradition in the Eastern churches. According to ancient legend, the first one was painted by Luke with Mary herself as a model. These icons may be classified into groups based on the degree of relationship or affection between mother and child that is shown to us. The earliest ones show Jesus enthroned on Mary’s arm, both facing the viewer, with no human affection whatsoever (Hodigitria types). Icons from the late Russian period show very great affection being expressed in both directions (Umilenie or Glykophilousa types). This one we have reproduced for you is in between. Jesus raises His hand in benediction and Mary grasps His arm and pulls His tiny hand to her face. For His part, Jesus appears not to notice. This beautiful contemporary icon is based on an original from the Vatopedi Monastery in Greece. On the fringe of the Aegean Sea, a narrow, rocky peninsula covered with wild, dense vegetation juts from the sea coast. It is only five kilometers wide by fifteen long. This is Mount Athos, the Holy Mountain, home to twenty Greek Orthodox monasteries including Vatopedi. Religious hermits first came to this place in the 7th century A.D., displaced from points further east by growing Islamic control. Vatopedi was founded in 972 and owes its name to the surrounding terrain (vatos = shrub, pedion = plain or ground). The original "Virgin of Vatopedi" or "Mother of Consolation" is of anonymous artistry and uncertain origin but probably dates from the 12th century.

Icons of this type are much more than portraits of mother and child. They are the principle images of the Incarnation (God become man), and of the Church, representing communion of the Divine (the Child/Word of God) and the human (Mary). The young Jesus is turned partly toward His mother and partly toward us. His right hand is raised in a gesture of blessing while his left holds a scroll, symbolic of the Sacred Word of God. Mary provides a comfortable throne for Him with her left hand. Mary’s eyes are very large, her nose noble and long, her mouth beautifully shaped. Mary is gazing at infinity or gazing within, with an expression of sadness, as if recalling Simeon’s words, "...and a sword will pierce your own soul too." (Luke 2:35)

Jesus is dressed as an adult, not as a baby. He wears a tunic and a cloak, called a hymation. The rich cloak is symbolic of His divine royalty, in sharp contrast to His bare feet symbolizing poverty and humanity. Mary wears a homophorion or cloak over her dress. It is of a deep blue shade that is the most common color used for her cloak in western art. A burgundy red would be seen more often in Russian iconography. Her homophorion is adorned with three stars on the head and shoulders (one is hidden by the child). These are symbolic of Mary’s perpetual virginity; before, during, and after her Son’s birth. 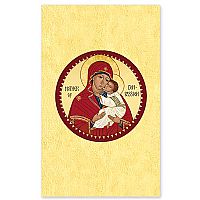 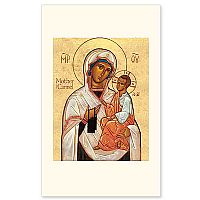