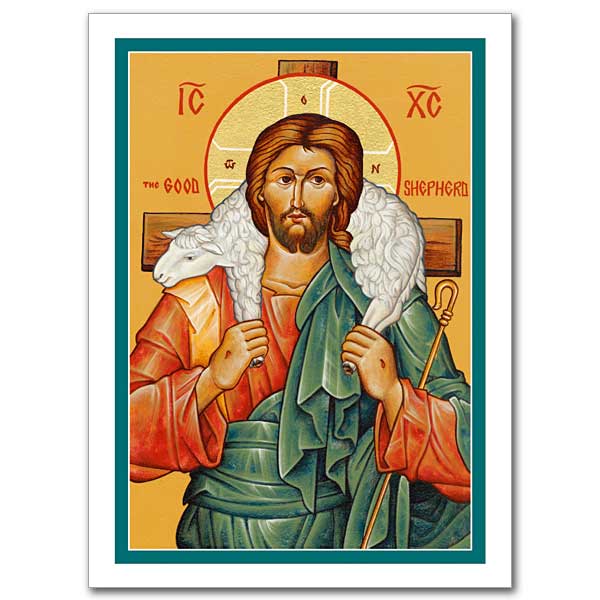 I am the good shepherd. I know my own and my own know me, just as the Father knows me and I know the Father. And I lay down my life for the sheep.

The symbolism of this icon hinges on Christ’s saving Passion. This image, borrowed from Greco-Roman art, is now cast with the imagery of the Paschal Mystery: the Resurrected Christ, who bears the marks of the nails, brings back sinners who were lost and now are found. The cross is seen behind Jesus as a sign of his victory over death. Tucked under Christ’s arm is a crosier, the shepherd’s staff. The crosier, used to corral straying sheep, seems too small to be of much practical use for the gentle lamb Jesus has lovingly placed upon his broad shoulders. However, it should be remembered that in iconography objects are typically only footnotes that allude to a deeper reality without distracting the viewer from contemplation of the central image of the icon. Animals are rarely depicted in iconography. Notable exceptions are the stable animals seen in icons of the Nativity and the donkey on which Jesus rides triumphantly into Jerusalem. When animals are depicted, they are often stylized, as is this lamb. It should also be remembered that Jesus is not only the shepherd, but as the Passion symbolism indicates, he is also the Lamb of God who takes away the sins of the world: “the Lamb at the center of the throne will be their shepherd, and he will guide them to springs of the water of life, and God will wipe away every tear from their eyes" (Revelation 7:17). Jesus’ red and blue-green clothing represent his “humanity cloaked in divinity.” The rather elongated face, thin nose and relatively large eyes create a mystical appearance that draws one into the Holy Face. Christ's halo, the iconographic symbol for sanctity, is inscribed with a cross (the nimbus) and the Greek letters omicron, omega, nu, spelling "HO ON." In English, this is translated as "The one who is," a reference to the scripture text, “The one who is, who was and who is to come” (Revelation 1:8). The abbreviated Greek form of the name Jesus Christ, "IC XC,” appears around the head of Our Lord. The face is the “true icon” and thus the name appears there. When we feel lost, abandoned and alienated from God, this image of Christ the Good Shepherd stands before us as the embodiment of compassion and loving concern. “For He was crucified in weakness, but lives by the power of God. For we are weak in Him, but in dealing with you we will live with Him by the power of God” (2 Corinthians 13:4).